PLAINFIELD — When she starts a tour of Mac’s Happy Acres, Liz McNamara makes sure to get an important point across: The Plainfield farm that is home to McNamara Dairy is a lot different now than when her grandmother, Hazel, oversaw the place.

School groups are a frequent presence at what is today a dairycentered operation. McNamara can often expect an elementary school throng, Dartmouth College visitors, even agriculture students from the University of New Hampshire. She begins with a history lesson.

“I always impart that it doesn’t look like it did in the pictures I see of when Grandpa and Grandma bought it,” McNamara said last week. “I’m not sure why they did it, but I’m glad they did. Those two made it through such adversity.”

Hazel and Bill McNamara both had farming in their blood. Hazel grew up on a dairy farm in Tunbridge, the second-youngest of nine Howe children, and Bill held an affinity for horses. Buying a farm in 1950 — even the rundown one on Plainfield’s River Road — became of a labor of love, and quite possibly a love for the labor.

Hazel McNamara, the center around which the farm revolved for 70 years, died on April 1 in her farmhouse home. She was just a month shy of 96.

Everything that happened at Mac’s bore Hazel’s fingerprints. She did chores before heading off to her nursing job in Hanover. She did chores when she came home. Everyone was welcome at her table, and no one ever lacked for food or friendship. She was the interested source of all family news and a fixture in the community. Her children returned to work the farm, and her grandchildren after them.

“She was so kind to everybody that she met, and curious,” said Barb LeClair, one of Hazel’s five children. “She always wanted to know what we were doing. Even in her later years when her memory wasn’t as sharp — I believe it was sharp — she was always asking what was going on. She’d take notes and get it straight. … “She’s just one of those ladies I thought was pretty special, pretty grand.”

Hazel and Bill McNamara had their first hardship within weeks 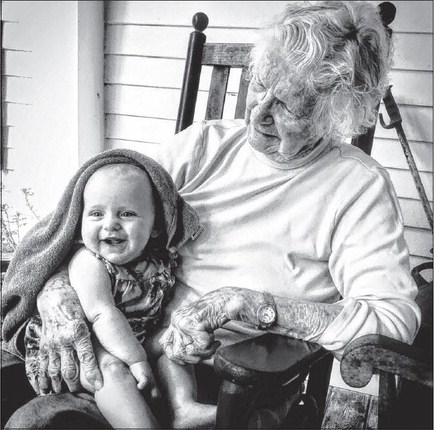 Hazel McNamara sits with her granddaughter Rozzie Houde last summer on her front porch at Mac’s Happy Acres in Plainfield.

of their marriage in 1947. A horse carrying Bill stepped into a woodchuck hole, and the resulting fall left Bill severely injured and in need of a lengthy hospital stay. He regained limited use of his limbs but would require his wife’s aid the rest of his life. (He died in 2004 at 79.) Thus, the notion of buying a farm may have seemed fanciful to some.

“You have a quadriplegic and his lady; why wouldn’t they buy a dilapidated farm?” Liz McNamara asked with a laugh. “That sounds like the logical thing to do, right? Crazy.”

Yet it came naturally for Hazel. Her childhood years revolved around the routine of milking cows and other work during a difficult time.

“She grew up during the Depression; they were very frugal, but she never felt like she didn’t have everything she wanted or needed,” LeClair noted. “That’s the way things were. You didn’t want for much, and she didn’t want beyond what she could have.”

The McNamaras started with a small herd of milking cows, gradually adding to their roster over time. Meanwhile, having graduated from Green Mountain College before earning a nursing degree from Mary Hitchcock Memorial Hospital, Hazel went to work as a visiting nurse in Hanover.

“She did it effortlessly,” said daughter Joyce Judy, of Waterbury, Vt. “My mother never complained, and she never looked back, I can honestly say that. It was not like she was so tired or whatever; that was not in her DNA, nor in my dad’s. They could have had their lives flipped upsidedown after they were married … yet they moved on and lived life.”

Over time, the farmhouse became what LeClair and Judy called “central dispatch,” with their mother serving as operator.

Those folks — be they family or workforce — would, of course, need to be fed.

“On a Saturday morning, if I’m over there getting a load of corn, I’d hear, ‘Hey, Steve, come on in,’ ” recalled Meriden farmer Steve Taylor, a longtime friend and former agriculture commissioner in New Hampshire.

“There would be 15 or 18 of Mac’s men and visitors all around that big kitchen table. Hazel would be over there cooking pancakes, waffles, French toast, bacon and ham, sausages and pastries. It was like a hotel buffet. … Always, to top it off, her daughters and grandchildren would carry on this tradition of chocolate chip cookies. A huge platter would appear, and they’d get devoured.”

“She had her strengths; not only was she a great provider and a great mother, but she also did barn work, too,” added daughter Anne Sprague, who owns neighboring Edgewater Farm in Plainfield. “She was very active. She did all the books, paid all the bills, milked the cows. She’s a pretty strong role model.”

The farm hasn’t always been strictly a dairy operation. From the late 1960s into the ’80s, raising and racing standardbred horses took center stage.

Sons Pat and Tom McNamara, with their father, were deeply involved in harness racing, hauling horses and rigs to tracks and fairs all over the region. While they traveled, Hazel continued to work as a nurse, run the home and contribute in other ways.

“They used to call collect from the tracks on the way home,” Liz McNamara said. “Do you remember that crazy (GEICO) TV ad, (Bob) Wehadababyitsaboy? We used to do that. She would be the center of everything. They’d honk if they won so she wouldn’t have to get out of bed.”

“She would come to some of the tracks, but we didn’t get home very early,” Tom McNamara said. “We’d be out late at night, until 2 or 3 in the morning. Somebody had to stay home and take care of the home fires. She’d go, but it made her a little nervous to watch me race.”

“Her role in the harness racing was to feed the horses; she didn’t do much of the training, but she was more of a stay-at-home mom at that point after she had retired from nursing,” Pat McNamara said. “We always had horses here, from four or five up to 70 or 80 at the height of it. … We always had a few cows around. My mum was from a cow family; her blood ran pretty thick in the dairy industry.”

And, ultimately, that’s where Mac’s Happy Acres returned. The decision to begin a glass-bottle processing operation is a large reason why McNamara Dairy is what it is today. The farm has diversified into other dairy products (Mac’s Happy Hens) and maple production (Mac’s Maple) as well.

“We’ve got a lot of irons in the fire,” Pat McNamara pointed out. “Mum was always very supportive of a new adventure.”

Hazel McNamara enjoyed having her immediate family close at hand, but not to the point of denying them the chance to explore alternatives. Ultimately, everyone returned home. “She felt that education was very important and to leave the farm, and yet there was no expectation that any of us would come back,” said Sprague, who attended UNH. “That’s the way all the kids went. If they wanted to come back, they were welcome and she’d figure out a way to make sure they were set, that there was a place for them.”

Anne, Tom and Pat would all get college degrees and return to farming, Tom and Pat at Mac’s, Anne down the road at Edgewater. Barb fell in love with animals, attending Cornell University’s veterinary school and starting Riverbend Veterinary Clinic — down the road as Edgewater and Mac’s — and running it (occasionally with her mother’s help) until her recent retirement. Even Joyce, now the president of the Community College of Vermont, returns to Mac’s most every weekend to help out. Many of Hazel’s grandchildren return, too.

Hazel McNamara lived long enough to also accumulate a supply of great-grandchildren. Sprague’s daughter, Sarah, named her first child Hazel Adelaide (Haddie for short) as a tribute to her grandmother.

It began with Hazel, her husband and a ramshackle farmhouse. It’s become so much more.

“I can make the case that it gave her the greatest satisfaction of her life to see what she and her husband had built: a functioning farm,” Taylor said, “and to see it carried on.” 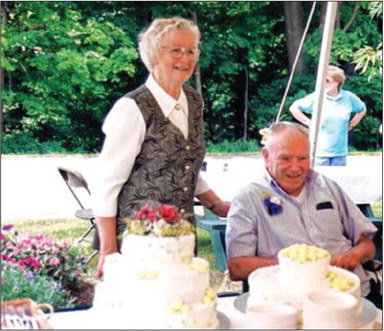 Hazel and Bill McNamara at their 50th wedding anniversary party in 1997 at Mac’s Happy Acres in Plainfield.

Hazel McNamara in a circa 1942 photograph.