‘He was happiest in the woods’

Blodgett’s parents moved the family to a Bradford, Vt., farm during the Depression, and it was to there that Putnam reported upon graduating from Dartmouth College in 1953, later buying the property from his folks. Over the next decade-plus, Blodgett, his first wife, Marilyn Geier Blodgett, and their four children tried to make a go of it.

Even as he won Vermont state awards for milk production, Blodgett couldn’t generate enough money to support the farm. According to son Peter Blodgett, his parents grossed $104,000 on dairy operations during the 1963 season but netted just $4,000.

“He was never going to make enough money to put his kids through school,” Peter Blodgett recalled.

So his father looked to the trees instead.

Of the many things that marked Putnam Blodgett’s adult life, the forest stands out. He maintained and harvested a 700-acre Bradford wood lot that another son, Boo, owns and works today.

Politically active, Blodgett, who died of pneumonia on March 3, 2020, at 88, made sure the powers that be realized the importance trees played in the overall statewide and regional agricultural picture.

“I got into woodland management after I realized paying for a modern dairy layout one squirt of milk at a time didn’t make sense,” he told Dartmouth Alumni Magazine earlier this year. “I’d wandered the woods since childhood.”

His father’s first memory of farm work involved wood, Peter Blodgett, a librarian in Thetford, said. The chore involved cutting logs into boards, piling them up with spacers between them and letting them dry, a process called “sticking lumber.”

“I think he said his first full day at the farm was doing that for six or eight hours,” Peter 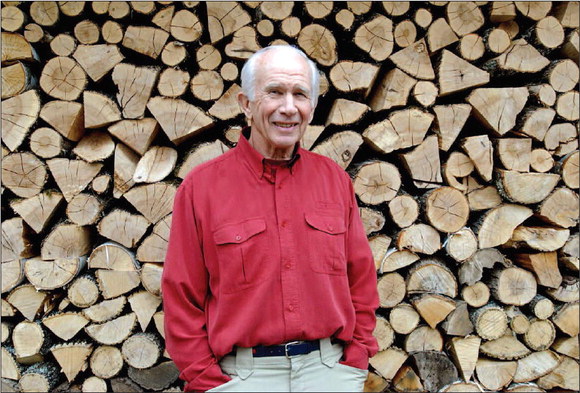 Forester Putnam W. Blodgett in a May 2007 photograph.

noted. “His relationship with wood goes back a very long way.”

Blodgett’s turn toward the forest gained momentum as a direct result of his Dartmouth education and his connection with Ross McKenney, the Dartmouth Outing Club’s woodcraft adviser during Blodgett’s undergraduate years and the man who oversaw construction of the college’s Moosilauke Ravine Lodge in the late 1930s.

A longtime Maine guide, McKenney nurtured Blodgett’s interests in woodworking and forestry. When the two met, McKenney’s duties included teaching woodcrafting at a camp for young boys and organizing woodsman weekend competitions, in which Blodgett would captain a winning team as a senior.

Blodgett spent his sophomore summer on the road, joining three graduating seniors on a 15-day, 5,500-mile drive from Hanover to Alaska, where he worked for a surveyor for the season. Once back in New Hampshire, the group advertised the two Ford Model A vehicles they drove for sale as “still in good shape” and “slightly used.”

“When he got an idea in his head, he pursued it,” Boo Blodgett said. “He was a very competitive person. He didn’t have the natural athletic ability to do some of the things he wanted to do, so his determination made up for it.”

When he decided to leave dairy farming, Blodgett put his outdoor education to good use by turning part of the Bradford farm — with McKenney’s help — into a youth camp. While Marilyn taught girls to ride horses, Blodgett guided boys in wilderness pursuits.

According to Boo Blodgett, youngsters would travel from cities to the camp to experience living in an Adirondack shelter, cooking over an open fire, learning to canoe and take hikes. He would continue running what became the Challenge Wilderness Camp for more than 20 years into the mid-1980s, long after selling the dairy farm.

“Running a camp gave me the opportunity to canoe and hike and be in the woods — to do all the things I loved but didn’t have time for as a farmer,” Blodgett said in the Dartmouth Alumni Magazine piece.

The wood lot has been in the family for some 90 years, Peter Blodgett said, and managing it became his father’s primary source of income. Kathleen Wanner, executive director for the Vermont Woodlands Association, said Blodgett — the VWA’s president for 20 years, up to his death — always made his intentions obvious.

“He was very clear about what was important to him,” Wanner said with a laugh. “He was very focused on our forest resource and caring for the land. He had very strong opinions, and you could always count on knowing what Put thought. Everything he did while I knew him was toward ensuring that the working landscape remained intact.”

To that end, Blodgett threw his weight behind Vermont’s current use program when it became law in the late 1970s. The program grants property tax breaks to owners of farmland and forests to help keep them from being developed.

“It’s the best conservation tool we have in the state,” Wanner said. “Put was tireless in his support of current use.”

The same attention went into maintaining his property. “Put is probably the most energetic, creative, self-motivated person I know,” said Tunbridge forestry consultant Paul Harwood, who first came to know Blodgett while working as Orange County forester in the 1970s. “There was nothing that was too much of a challenge for him. … That pretty well described his interest and attitude about owning land, that it was a challenge. He looked at it for multiple resources: wildlife, timber, recreation, water quality, air quality, soil health. It was everything, the big picture.”

With winters leaving him free from monitoring the trees, Blodgett took his outdoors interests in other directions. He learned to cross country ski and eventually added track-setting skills to his resume of abilities. He would produce courses for multiple Dartmouth carnivals, three NCAA Championships and the cross country and biathlon competitions at the 1980 Winter Olympics in Lake Placid, N.Y.

Blodgett was also an expert canoeist, something that took front and center in 1996. Taking a sabbatical from work, Peter Blodgett flew to Canada to join his father and four others on a 500-mile trek down the Kazan River, 30 days on the water through the Northwest Territory and what is now Nunavut.

“We were flown out by float plane and dropped off; I think we saw one plane in that month when we were on the river and saw no other people,” Peter said. “He liked long paddles. … I asked him at the end what he missed the most; ‘Trees,’ he said. We were above the treeline in the Arctic tundra. The tallest things we could find were shrubs.”

Blodgett kept his connection to Dartmouth and McKenney alive in his later life as well. The Moosilauke Ravine Lodge that McKenney help construct was torn down and rebuilt three years ago with the help of about 100 white pine logs from the Blodgett wood lot.

He regularly hiked to the adjacent summit of Mount Moosilauke, including on his birthday last summer. The lodge will host Blodgett’s memorial service on Aug. 1, 2021, on what would have been his 90th birthday.

“He was happiest in the woods,” Peter Blodgett said.

As the person in charge of the family forest now, Boo Blodgett figures his average day is not unlike what his father ’s was for many years. Blodgett put the acreage in the Upper Valley Land Trust, meaning it will remain a forest forever.

“He felt comfortable and liked to wander in the woods,” Boo Blodgett said. “He appreciated the artistry of nature. He loved the trees.” 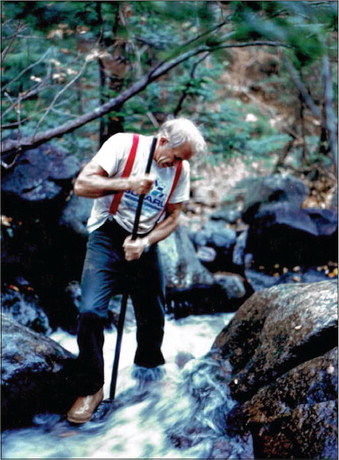 Putnam Blodgett does trail work on Mt. Moosilauke in October 1990.