Occupying every other parking space in the lot near the Geisel School of Medicine, residents planted themselves in lawn chairs, snacked on popcorn and some danced to oldies played over speakers while waiting for the traditionally formal event to start.

Nearly everyone wore masks and town employees who donned safety vests, masks and often face shields directed people to sit 6 feet apart for social distancing. There, they were invited to vote with paddles shaped like a hand that also “doubles as a fan,” Town Clerk Betsy McClain said. 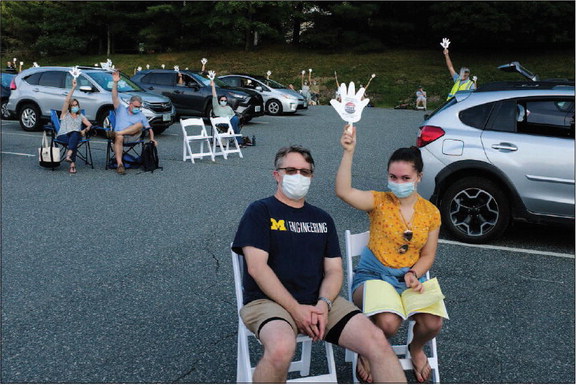 Lara Witwick, 16, holds up her dad Randy Witwick’s voting card during Hanover Town Meeting at the Dewey Field Parking Lot in Hanover on Tuesday. The meeting was held outside to allow for social distancing. 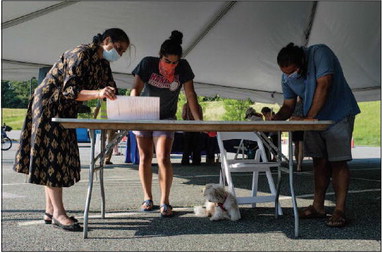 Prabhjot Kaur, left, fills out her ballot at the Town of Hanover polls with her daughter Simran Kaur, middle, and son Angad Singh, right, in the Dewey Field parking lot on the Dartmouth College campus in Hanover on Tuesday. The family dog Zoya joined them at the outdoor voting area preceding the drive-up Town Meeting.

off the event by telling attendees he hopes Tuesday marked the “most unusual Town Meeting you will ever go to” before leading them in a round of applause for election workers who spent the day manning the polls and the evening walking between cars with microphones for those looking to ask questions or debate the warrant.

The vote, which included the submission of roughly 850 absentee ballots, replaced Hanover’s traditional May floor meeting, usually held indoors at Hanover High School but postponed because of worries about social distancing indoors.

Even with the new format, residents made work of 12 warrant articles, including the approval of a budget, and debated the town’s support for the police department during a meeting that went past sundown.

But the spending plan was questioned by several residents who took issue with the police department’s budget, set to increase $111,077, or by 3.8%, according to the town’s annual report. Opponents also advocated for cutting $52,000 allocated for bulletproof vests and new equipment for police vehicles.

In the wake of the killing of George Floyd and the surge of support for the Black Lives Matter movement, the town should rethink its support for traditional police services and instead look to fund other priorities, such as social services, some argued.

“Given the national climate with police killing black people every single day, I just want to know the reason why we’re increasing police spending,” asked Dalia Rodriguez, a candidate for Selectboard.

Town Manager Julia Griffin responded that staffers have “a number of issues that we are tracking right now” and could reallocate funds to initiatives, such as combating homelessness and fighting poverty. She also pointed out that Police Chief Charlie Dennis was recently named to a statewide task force looking at police training and issues surrounding racial injustice.

Rather than trim police spending, voters approved a motion expressing support for “communities of color with respect to policing in our community ” and urging town government to pay closer attention to racial issues.

The budget also was opposed by Jim Rubens, of Etna, who pointed out the spending plan was crafted before New Hampshire’s state of emergency and economic downturn resulting from the coronavirus pandemic.

Rubens, a downtown property owner, said businesses “have been decimated” since March and said Hanover has a diverse population that would be “intensely” affected by tax increases.

Hanover Finance Committee Chairwoman Kari Asmus replied that town officials are capable of reducing expenditures in the event that people cannot pay their taxes. The committee, she said, “remains comfortable” with the budget.

Plans to turn 260 acres of woods and old farmland along both sides of Greensboro Road into a town forest also were OK’d on Tuesday.

Residents voted by a show of hands to spend $500,000 to help purchase land which crosses Mink Brook and includes a brick farmhouse from 1850.

The Trust for Public Land, assisted by the Hanover Conservancy, hopes to spend $2.5 million acquiring the property from the Leavitt family. So far, an anonymous donor has footed $500,000 to help the project, which also received a $600,000 community forest program grant from the U.S. Forest Service.

None of the town’s share will come from new taxes, and will instead be taken from existing reserve and conservation funds.

Officials also hope to sell the property’s farmhouse to help finance the overall project, and a separate four acres could be used by Twin Pines Housing Trust to build “a small cluster of affordable cottage-style homes targeted to new homeowners,” according to an April news release.

The results of ballot voting, which included a contested Selectboard race and several zoning amendments, were not available by deadline Tuesday. 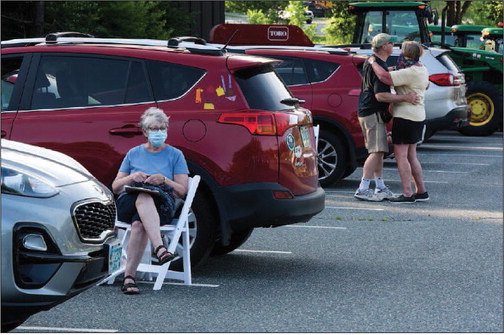 Kathy Geraghty, of Hanover, left, knits a shawl as Bill and Janice Fischel, right, dance to music played over speakers as they wait for the start of the Town of Hanover’s drive-up Town Meeting at the Dewey Field Parking Lot in Hanover. 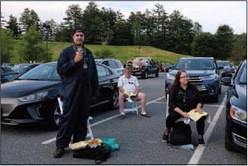 Left: Chris Connelly, of Hanover, left, questions Hanover Town Manager Julia Griffin’s statement about the prevalence of gun ownership in the community during a debate over funding bulletproof vests for Hanover police at the Hanover Town Meeting on Tuesday. Rick MacLeay, center, and Rosemary Connelly, right, listen to the exchange.